This just in, cartoon apes for profile pictures are no longer worth £100K
Written by
Jordan Dale 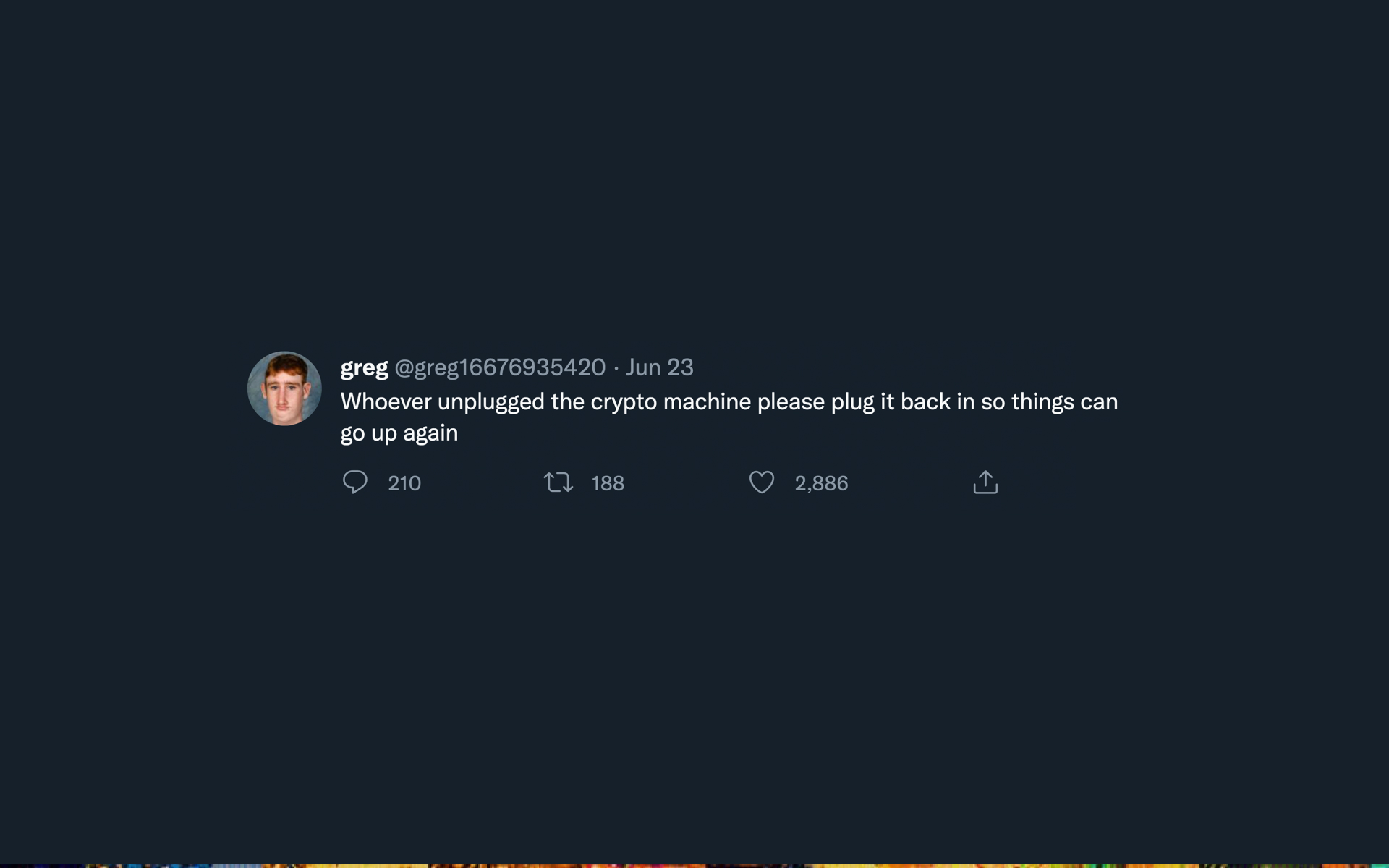 If you’re not following the descent of the cryptocurrency market, I can confirm that they are all currently residing in the toilet. This leaves the world of Non Fungible Tokens (NFTs) well and truly forked.

No, that’s not a euphemism. We find ourselves in what traders call a ‘bear market’ - where all financial assets are trending down. If you haven’t noticed, that’s because there are bad vibes in the world right now - from inflation to war and everything in between. And parties with Snoop Dogg in the metaverse are not a priority when everyone is starting to sweat about the price of a pint closing in on £7.

This crypto crash has led to a fork forming in the road of the NFT movement. Where big-name NFT projects are forced to go one way, to make sure they protect their brand and community through the treacherous seas of uncertainty. But independent NFT creators are free to go this other way, where they can build something new with a “nothing to lose” attitude. With the WAGMI attitude (that’s web3 slang for “we are gonna make it”) it’s time to travel through these completely open waters for creating something unique and not ape related.

If you’re familiar with the web3 space, you would’ve seen the news of YugaLabs (founders of Bored Ape Yacht Club) acquiring Larva Labs (creators of CryptoPunkz and Meebits) in March this year.

If you’re not familiar with the space - this is the equivalent of Nike acquiring Adidas, or Apple acquiring Google. It’s big, and at the time was somewhat frustrating for independent creators trying to get groundswell behind a project.

Since this merger, they’ve managed to both dominate and decimate the NFT market. Most noticeably with their metaverse land sale (Otherside) which sucked $100 million of liquidity out of the global NFT market due to insane demand, leading to high gas fees (the processing costs of minting an NFT), all executed with poorly written code.

In layman’s terms - they got too big, too greedy, and didn’t think properly about how much this project would disrupt the Ethereum (ETH) network it lived on. Traders rapidly had to sell assets in order to stack up on the insane amount of ETH required to purchase a plot of land. Doing so, caused the market to crash, and all other NFT’s became worth considerably less as a result.

This was the catalyst for the recent fall of the NFT market. And all of that was happening while war broke out, before inflation reached an all-time high, and before Joe Biden fell off a bike.

Next wave tools for creators

So while the aforementioned big players are on their side of the fork doing that, there’s a whole new path that’s being forged that creates exciting opportunities for those looking to get into the space and build their own NFT project.

Much like the Web 2.0 boom, when Dreamweaver (remember that?!) meant anyone could build a website, and more recently with services like Squarespace, the web3 space is becoming more accessible to those who want to build an NFT project from the ground up.

In comes Kairos, a web-based platform that allows you to create, publish and sell NFTs, without having to write any code. Backed by Alexis Ohanian (founder of Reddit), Kairos are building tools to break down barriers to NFT participation - with a mission to see creators of all kinds, and people of all backgrounds, have the opportunity to engage with NFTs and cryptocurrencies. And it’s run on the Solana blockchain - a carbon-neutral blockchain with the ability to process 50,000 transactions per second (compared to Ethereum’s 15 transactions per second). This means lower transaction fees for collectors to buy your NFT.

They offer an extremely easy-to-use web service with an experience that feels like a combination of choosing a template from Squarespace, mixed with listing an item on eBay. Launched in June, they recently helped me along with a small team of creatives and artists launch Rubles For Ukraine. An NFT art project with 40 artists that turned Russian Ruble banknotes into protest art pieces, with all sales going towards humanitarian aid for Ukraine.

And for those looking to build on Ethereum, we have Bueno. Founded by big-name web3 artist Pablo Stanley (the man behind Robotos and Humankind) and being used by both big and small projects including Wonderpals. Do yourself a favour and give them a Google to see some seriously cute art collections.

These services are just the beginning, and I predict will become an exciting tool for the Gen-Z generation of internet enthusiasts. Let’s remember these are the same people who grew up with things like using Shopify, Squarespace and Facebook ads as a second-nature skillset, with some having gone on to create million-dollar companies from their bedrooms. Who’s going to be the Ben Francis of NFTs?

So the NFT movement may be forked. And the cryptocurrencies surrounding them are worth 80% less than they used to be, but this is the time to innovate and build for the future.

It’s exciting to see what people can do when the barriers to this side of the web3 world are brought down and the pressure of a “bubble burst” is taken away. The more tools like this, the more accessible the space becomes to artists and creators, the more good we get out of it, and the closer we get to NFTs becoming part of the everyday culture of our society.